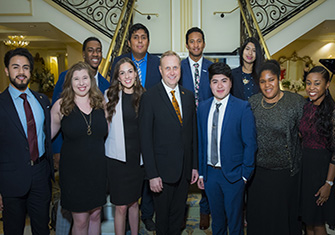 The 2019 Legacy Scholars, who embody what can be achieved with the help of scholarships, with WP President Richard Helldobler 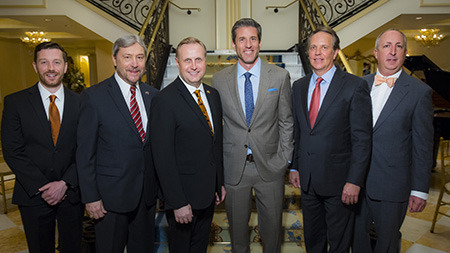 The gala, held at The Grove in Cedar Grove, New Jersey, is the Foundation’s largest event to raise funds to support the University’s mission of promoting student success and academic excellence through student scholarships. Since 2013, the gala has raised more than $1.1million for student scholarships.

“Support for the Legacy Award Gala truly makes a difference in the lives of our students, most of whom rely on scholarships to complete their studies,” says Richard J. Helldobler, University president.

“We’re grateful for the opportunity to highlight our loyal and supportive alumni, friends, faculty and corporate partners as our honorees — while also raising money for student scholarships,” says Pam Ferguson, president of the William Paterson University Foundation and vice president for institutional advancement.

Each year, the University provides more than $11 million in scholarship support for students. This year, nearly $1.3 million of that total was provided by generous donors, allowing the institution to bestow close to 600 scholarship awards.

Kevin Burkhardt ’97graduated with a bachelor’s degree in communication in 1997 and began his sports broadcasting career on the William Paterson campus, covering Pioneer athletic events for the University’s television station. He is the face of FOX Sports’ pre- and post-game coverage throughout the MLB regular season, post-season and World Series, and is a two-time Emmy winner as a studio host of the World Series on FOX. Burkhardt will also handle play-by-play duties for a select number of Tampa Bay Rays games this season on Fox Sports Sun. Burkhardt met his wife, Rachel Blanken Burkhardt ’98, on campus. They have a son, Logan, and currently reside in Los Angeles.

Vincent Parrillo, professor of sociology and director of the Paterson Metropolitan Region Research Center, is the author of a dozen books, including two of the nation’s leading college textbooks, and more than three dozen journal articles, with translations in nine languages. A Fulbright Scholar and Fulbright Senior Specialist, he went on dozens of speaking assignments for the U.S. Department of State and U.S. Department of Defense, and has lectured at dozens of universities in Asia, Canada, Europe, and the U.S. In addition, he is the executive producer, writer, and narrator of five award-winning PBS television documentaries about Paterson, N.J., including his most recent film, Paterson and Its People.

NK Architects, a New Jersey-based regional design firm founded in 1972, has won awards for their designs on campus. They began an ongoing relationship with William Paterson University in 2012 through the design and construction of University Hall. This transformational new academic building, designated as a LEED Gold building, was the first in a series of projects identified by the University to renew the campus core. Growing out of the success of University Hall, NK Architects was retained by the University to renovate and renew Preakness and Hunziker Halls, two of the oldest academic buildings on campus.