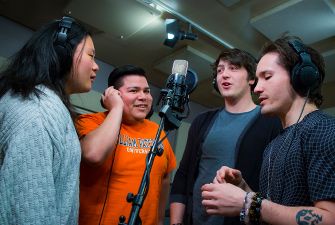 William Paterson University in Wayne, N.J. has been named among the 20 top music business schools in the nation for the second consecutive year–and the only school in New Jersey—chosen by Billboard magazine in its annual spotlight on industry-related courses at colleges and universities.

“We are proud and elated to be included in Billboard’s 2019 list of the top 20 music business schools in the country,” says Daryl Moore, dean of the College of the Arts and Communication at the University. “Our program is exceptional because of our distinguished faculty, notable alumni and hands-on learning opportunities that prepare our students for all aspects of the music business world.”

The University, which offers bachelor’s and master’s degrees in music and entertainment industries, as well as an MBA degree with a music industry focus through the University’s Cotsakos College of Business, was recognized for offering learning opportunities that go beyond the classroom.

William Paterson was cited by Billboard for being home to the Music Biz 101 & More radio show and podcast, which reached its 200th episode in 2018. Last May, students taped sessions with key executives attending the Music Biz conference in Nashville. The University’s deep industry ties and proximity to Manhattan enabled students to meet with Warner Music Group executives at the label’s New York offices in November and Sony Music offices in March.