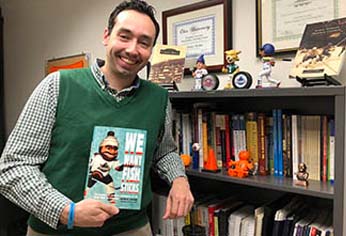 Nicholas Hirshon, William Paterson University assistant professor of communication, will release his new book, “We Want Fish Sticks: The Bizarre and Infamous Rebranding of the New York Islanders” on December 1. The book is available on Amazon.

Hirshon, a former reporter for the New York Daily News, wrote three series that sparked efforts to preserve historic sites including the longest continuously operated movie theatre in the U. S. He has also written for The New York Times, The Wall Street Journal and Hockey News. In his new book, he looks at the National Hockey League’s New York Islanders in the depth of a period of struggle after winning four Stanley Cups in the early 1980s.

With a new logo that drew comparisons to the mascot for Gorton’s frozen seafood, opposing fans taunted the team with chants of “We want fish sticks!” Hirshon covers the tumultuous period following that included a 28-month span of humiliating losses and examines the era through period sources and interviews with the people who lived it.