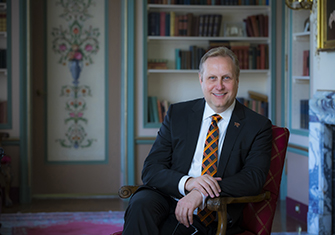 The formal investiture of Richard J. Helldobler as the eighth president of William Paterson University in Wayne, New Jersey will be held on Friday, October 5, 2018 at 11 a.m. on campus in the Shea Center. Watch the Ceremony Live, 10 a.m.

A colorful, traditional academic procession from the University Commons to Shea Center will begin at 10:30 a.m. The procession will include student representatives, alumni, delegates from colleges and universities in New Jersey and beyond, the faculty, staff and administration, invited speakers, members of the Board of Trustees, President Emeritus Arnold Speert, and President Helldobler.

For additional information, or to reserve media space at the event, please contact Mary Beth Zeman, director of public relations, at 973-720-2966 or ZemanM@wpunj.edu.