Leading a team of investigators from numerous universities, WP’s experts aim to investigate the role of climate and seawater chemistry in the demise of ancient shark species 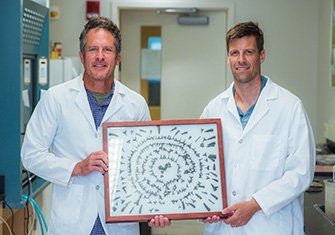 William Paterson University environmental science professors Michael Griffiths and Martin Becker have been awarded a three-year, $250,000 grant from the National Science Foundation to be leaders in a multi-university research project.

In their project, titled “Collaborative Research: Biogeochemical Fingerprinting of the Megatoothed (“Megalodon”) Shark: A Dual Study in Thermophysiological Evolution and Seawater Chemistry,” Griffiths, a geochemist and paleoclimatologist, and Becker, a paleontologist, will use the chemistry of ancient shark teeth to reconstruct shark body temperature and dietary behavior, as well as seawater chemistry, dating back 15 million years.

All healthy ecosystems contain an abundance of sharks. The world’s oceans are currently warming up at an extremely rapid rate that is leading poleward habitat shifts of many marine organisms, including sharks, the researchers say. These habitat shifts result in many challenges, such as the management of fisheries’ resources, as competition among species changes and new ecosystems are developed.

“Our project aims to probe the historic relationship between environmental temperature, ocean chemistry, and the internal body temperature, evolution, and habitat of various marine vertebrates across two important geologic time periods: the Mid-Milocene Climate Optimum, between 15 and 17 million years ago, and the Pilocene, between 2.5 and 5 million years ago,” Griffiths explains. “These periods of time encompass some of the largest oceanographic and climatic changes in the earth’s history.”

“The evolution of the megalodon shark and its close relatives remains enigmatic, despite recent paleontological advances,” Becker adds. A central question persists regarding these large predatory sharks and their fossil ancestors: Were they ectothermic or endothermic? “Such an evolutionary detail could point to the role of thermophysiology – maintaining a relatively constant internal body temperature independent from the environmental temperature – in the demise of the megalodon so many millions of years ago.”

The geochemical data produced from their study of shark teeth, Griffiths says, carries much significance beyond the megalodon. Notably, the chemical evolution of the global ocean is connected to various geologic processes related to plate tectonics and the carbon cycle, among others.

During the first phase of the project, researchers will discern whether temperatures measured via the relatively new method of clumped isotope thermometry (CIT) in modern shark teeth accurately reflect known shark body temperatures. In phase two, they will estimate body temperatures and discern the dietary preferences of fossil sharks, and lastly, the NSF-funded team will use the geochemical results they generated to reconstruct seawater chemistry dating back eons.

One of the central focuses at William Paterson University is the involvement of undergraduates in original research led by faculty.

This NSF grant will offer additional student-funded opportunities for participation in cutting-edge research at both entry and advanced levels, including collection of fossil shark teeth, laboratory preparation and analysis of samples, opportunities to work as visiting scientists in the geochemistry laboratories at Rutgers-New Brunswick and University of California Merced, attendance at professional conferences, and preparation of manuscripts for publication in peer-reviewed journals.

The William Paterson duo currently has a group of six undergraduate students working with them on the early phases of this project and will be recruiting others throughout the duration of the grant. Two of their current students, Allison Neumann ’19 and Chelesia Clarke ‘19, using results from the initial stages of the NSF-funded project, are lead authors on an abstract to be presented at the American Geophysical Union Fall Meeting – the largest geophysics conference in the world – in Washington, D.C. Both students received funding to work with Griffiths and Becker during the summer, in advance of the NSF grant, through the Garden State-Louis Stokes Alliance for Minority Participation program (GS-LSAMP), which aims to increase academic success among traditionally underrepresented minority students by expanding opportunities in STEM.

“Involving undergraduates in original research provides them with unique, hands-on experiences and skill sets that they simply cannot get in the classroom,” Becker says. “It is these experiences that help them to enter both the job market and graduate school.”