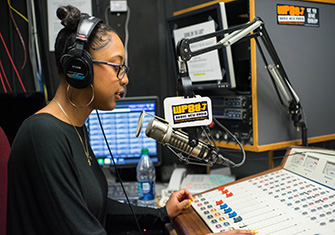 William Paterson University’s student-run radio station, WPSC-FM (88.7) in Wayne, NJ, is one of five finalists in the nation and the only station in the Northeast nominated for the 2018 Marconi Award for “Noncommercial Station of the Year.”

The National Association of Broadcasters (NAB) announced the finalists for the 2018 Marconi Radio Awards on July 16, honoring radio stations and on-air personalities for excellence in broadcasting. The winners will be announced September 27, 2018, at the NAB Marconi Radio Awards Dinner and Show in Orlando, Florida. In addition to WPSC-FM, other nominees in the category include KHJK-FM in Rocklin, CA; WEEM-FM in Pendleton, IN; WUFT-FM in Gainesville, FL; and WWOZ-FM in New Orleans, LA.

“I am delighted that the students at WPSC are being recognized with this prestigious nomination,” says Rob Quicke, William Paterson University communication department chair and general manager of WPSC-FM. “The students are diligent in their duties at the station and on related humanitarian efforts and I am proud that their enthusiasm and hard work is being recognized.”

William Paterson’s WP 88.7 FM has won a stream of awards, including being named Best Radio Station in the Nation (among institutions with more than 10,000 students) by the Intercollegiate Broadcasting System (IBS) four times since 2012. The station was previously nominated for the Marconi Award in 2015 and 2017. In addition to their awards, eight students and recent graduates of William Paterson University’s communication department spent the last week of June in Vieques, Puerto Rico, to continue the volunteer work they started there in January. Accompanied by two faculty and two staff members, the group’s primary goal was to assist WVQR 90.1 FM Radio Vieques, the community radio station serving Vieques, in its recovery from the devastation of Hurricane Maria and to establish a ham radio network with funding organization Vieques Love to acquire equipment to build the network, license local operators, and distribute radios.