The 2017 New Jersey State School Counselor of the Year and co-founder of ReigningIt, alumnus provides tech-based training to counselors nationwide 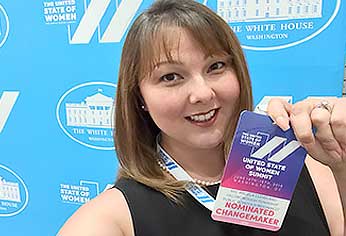 In 2001, when Angela Cleveland ‘00 first became a school counselor, she was relieved that her job didn’t require a substantial use of technology. She was among the last in her generation to purchase a cell phone, and resisted the upgrade to a smartphone. She played educational VHS tapes for her students, and didn’t understand the big fuss over social media.

Eventually, however, Cleveland realized she had to be technologically savvy to best support her students. “My job as a counselor, as an educator, is to prepare our students to enter the workforce and be contributing members of society,” Cleveland says, noting that New Jersey has four times the national demand for jobs with a connection to computer science. “I jumped in, learned about technology, and embraced it. And when I did, it was like my world went from black and white to color.”

One of Cleveland’s best friends, Saqi Mehta, became a recruiter for tech giants in Silicon Valley and lamented the lack of diverse candidates. Then, when Cleveland took part in a panel discussion for the Clinton Global Foundation – centered on how there should be no ceiling on opportunities for women – a black, female college student in the crowd explained that she was the only non-white person, and only woman, in the tech company for which she interned. The student was subsequently rethinking her decision to pursue computer science.

Six months later, in October 2015, Cleveland and Mehta teamed up to create and launch ReigningIt – an online community that aims to close the gender gap in STEM (science, technology, engineering and math) by building a network of mentorship and support. Since then, their website (www.reigningit.com) has featured nearly 500 inspiring stories about women working in STEM. “The idea was twofold: Inspire young women in middle and high school to explore technology, and then once they’re in the industry, retain them,” Cleveland explains.

Meanwhile, her own career as a counselor in Hillsborough was flourishing: Cleveland was named 2017 New Jersey State School Counselor of the Year by the American School Counselor Association. The program honors counselors who enact innovative and effective programs, leadership and advocacy to advance students.

“Part of our code of ethics, as school counselors, is that we should impact students on the individual level and also look at the systemic issues, the barriers, that keep our students from accessing opportunities,” Cleveland explains. “And I was seeing, more and more, working with young people, the disparities in our nation’s math and computer science classes. There was a gender difference and a racial difference. Students were tying themselves to what they felt correlated with their gender or racial identity … Bill Gates and Mark Zuckerberg being held up as innovative models of computer science sends a message that computer science is for white boys.”

Cleveland decided that tackling the systemic issue in STEM would ultimately allow her to make a bigger difference in more students’ lives than her career in one school district would allow. Therefore, this past July, she resigned as a school counselor to work as a consultant with the non-profit National Center for Women in Information Technology (NCWIT), via their Counselors for Computing program. Cleveland travels the nation to provide free, tech-geared resources and training to school counselors across the country. “It’s hard to prepare students for jobs of tomorrow that don’t yet exist, but the one thing we do know is that every one of those jobs will have a technology component; computers will be involved,” Cleveland says. “You can’t guide students toward careers you can’t explain.”

She is immensely grateful to William Paterson University for her own career. Cleveland “grew up poor,” worked full-time as a teenager, and did not think college would be an option – financially. However, she was awarded a full scholarship from WP’s Board of Trustees. Thrilled with the “amazing opportunity” to further her education, Cleveland graduated in four years with a double major in education and English, a minor in psychology and another minor in the humanities honor track. She later eared three master’s degrees: University of Pennsylvania (Psychological Services), Rider University (Organizational Leadership), and The College of New Jersey (Instruction).

“My passion is ensuring that every child has access to opportunities for sustainable careers,” Cleveland says. “I see technology education and integration as a pathway.”

Are you a school counselor interested in free training from NCWIT? Visit ncwit.org/c4c or email Angela.Cleveland@ncwit.org.