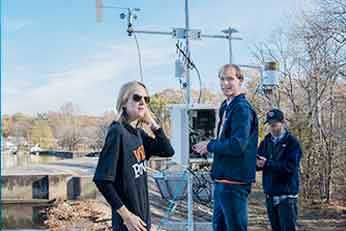 The local weather report just got really local for the William Paterson community.

A weather station has been set up at the campus Alumni House, on the Oldham Pond property, which, in the coming weeks, will feed real-time, high-level weather data to the Environmental Science department’s webpage. In addition to air temperature, the station also reads wind speed and direction, relative humidity, barometric pressure, solar energy, rainfall, and water temperature of the pond.

“Curriculum was a big push,” Callanan says, noting the department’s methods courses of Soil and Water Analysis and Senior Practicum, in addition to Global Climate Change, as the most direct beneficiaries of the station. “Overall, in our department, we place a lot of emphasis on hands-on and field experiences.”

Additionally, using raw data in any science classroom is invaluable, the professor explains, because it introduces students to the learning process of data acquisition and management. Textbooks present data in prepackaged graphs and charts. This approach, on the other hand, allows the students to create their own graphical representation of real-world data.

“Also, collecting our own data teaches students how to troubleshoot. What do you do if there is a gap in data because a bear knocks off one of our sensors, or the communication link goes down? I like when real problems pop up,” Callanan adds.

A weather station had been installed at Oldham Pond more than 15 years ago, but sometime around 2008, it stopped collecting data. Fortunately, some of the equipment was still in working order. Throughout the summer, Callanan, DaSilva, a team of three William Paterson students, the University’s IT and Facilities Departments, and outside consultants worked to upgrade old technology, install new sensors, link the weather station to its own computer at the pond fieldhouse, and then feed that data to the University website.

With this new technology, the University will contribute to the Northeast Regional Climate Chapter, where weather data is shared among partner universities. Additionally, according to DaSilva, although there are other weather stations in Passaic County, there is a void around the campus area which this new station will fill.

Callanan and DaSilva, in collaboration with the Bureau of Forestry at the Pennsylvania Department of Conservation and Natural Resources, have also set up a second, mobile soil monitoring station at one of the professor’s prescribed fire research sites in the Delaware State Forest in Pennsylvania. That station will be used for measuring soil hydraulic conductivity, soil temperature, fuel moisture (an important aspect of forest fires) and volumetric water content. This information will be incorporated into two courses Callanan teaches about soil.

Zack Biskup ‘18, an environmental science major, is one of the students who worked to set up the weather station this summer, functioning as team engineer. His science knowledge, skill in using power tools, and work experience as an electrician made him a great fit for the task – one which he happily threw himself into.

“When you walk into a classroom, and you know that professor works in the field, it makes an immense impact,” Biskup says, lauding Callanan and DaSilva for their efforts on both weather stations and the real-world application to students. “You know that professor will bring so much hands-on knowledge to the course. That’s one of the most important pieces of walking into a science classroom.”

DaSilva says he would like to get more students involved in the technology of the weather station going forward – setting up the various sensors, as well as the programming and software behind how frequently readings are produced and what types of data are stored.