“Silk City Artists and Musicians,” a Documentary by Professor Vince Parrillo, to be Telecast on NJTV on November 22 and 26, 2017 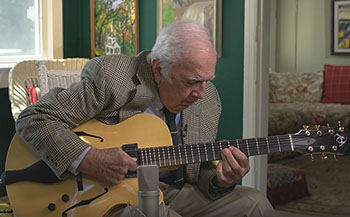 Silk City Artists and Musicians, a documentary written, narrated and co-produced by Vince Parrillo, a sociology professor at William Paterson University and director of the University’s Paterson Metropolitan Region Research Center, will be telecast on Wednesday, November 22, 2017 at 8 p.m. and Sunday,  November 26 at 6 p.m. on NJTV. Jarek Ziaja, who has worked with Parrillo on two previous Paterson documentaries, is the co-producer and film editor; and Rhoderick Holliday, video production coordinator, Instruction and Research Technology, at William Paterson, is the associate producer and director of photography.

The documentary portrays the thriving arts community in the city of Paterson. Bucky Pizzarelli, legendary guitarist, and Federico Castelluccio, a visual artist and actor best known for his role as Furio on The Sopranos, are among the artists and musicians who discuss the influence of Paterson on their work.

Paterson’s Essex and Phoenix Mills, buildings that are designated for 70 percent artist and musician housing, and the Art Factory, a 22-building factory complex serving as the city’s creative arts center, are featured in the film. Former Paterson Mayors Lawrence “Pat” Kramer and Congressman William Pascrell, Jr., who were instrumental in securing these artistically dedicated facilities, comment on the role of artists and arts for Paterson.

The film is Parrillo’s fourth PBS film about Paterson. His previous films, Smokestacks and Steeples: A Portrait of Paterson; Gaetano Federici: The Sculptor Laureate of Paterson; and Paterson and It People, all won film festival awards. DVDs of these films are available at Lambert Castle and the Great Falls National Historical Park.